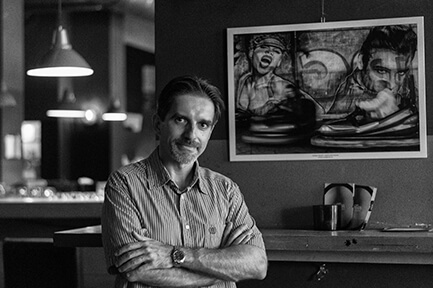 Photo: Irén Jánosi
Krisztián Tóta
‘Photographs are all we have and every picture is a self-portrait after all.’ – Ákos Győrffy | Motherland

I am a freelance photographer based in Dunakeszi, Hungary.

I was born in 1979. I graduated from the Faculty of Law then I qualified as a tax adviser. I really started to take photographs in 2013.

I am especially interested in people-centered documentary photography and portraiture.

Framing real happenings, human stories, faces, emotions, moods, thoughts from my point of view, yet remaining authentic to the themes that are often profound and grotesque, humorous at the same time, not lacking playing with forms, structures, spirituality and surreal features either, which inspire me when I release the shutter.

Short Street Stories – a collective tribute to Martin Parr’s and Nick Turpin’s street photography – two photos were selected to the book presented as an ambitious tribute to the two photographers, consisting of pictures of 173 authors from all over the world

37th Hungarian Press Photo Contest (2018) – one photo was selected to the exhibition of the Hungarian Press Photo Contest at Robert Capa Contemporary Photography Center – Budapest, Hungary, and that photo was added to the book titled ‘Pictures of the Year 2018’ edited from the exhibited works, in the category of ‘Socio Documentary Photography (singles)’

Photocontest to the 60th anniversary of the Revolution and War of Independence of 1956 titled ’56 from the Point of View of Posterity’ – category: Literary illustration (in accordance with a literary work about ’56) – MAFOSZ Silver Medal

My website uses cookies so that I can provide you with the best possible user experience. Cookie information is stored in your browser and performs functions that help you when you return to my website and help me understand which sections of the website you find most interesting and useful.

Strictly necessary cookies should be enabled at all times so that your preferences can be saved for cookie settings.

My website uses Google Analytics and Facebook to collect anonymous information such as the number of visitors to the site and its most popular pages.

Strictly necessary cookies should be enabled at all times so that your preferences can be saved for cookie settings.